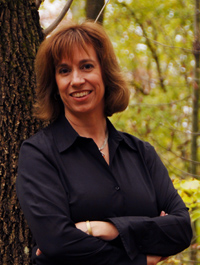 I was a confused teenager. I know this because when I headed off to college, I was majoring in aerospace engineering. Besides the fact I was good in math and science, I had an older brother that was majoring in nuclear engineering and I couldn’t let him be better in anything than me. But young people make decisions based on weird reasons. Today, he’s a nuclear engineer and I’m a writer. Since I dropped the astronaut stuff, he definitely became the better engineer. But I’m pretty certain I have him on writing.

After finishing a degree in journalism, I’ve spent the last couple of decades writing non-fiction, if you can call public relations writing non-fiction. (Though a good PR person never lies, sometimes the stuff is closer to fiction.) I started out an Air Force lieutenant at Los Angeles Air Force Base, Calif. I got to work on some pretty incredible stuff as a young 20-something year-old. You know GPS, the navigation system that everyone has in their cars today? I was the original Air Force PR person for that system while it was under development. 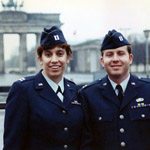 Then it was over to Europe for six years of government-paid vacation. True, my vacation was interrupted occasionally with airplane crashes, the end of the Cold War, a murder trial, the removal of nuclear missiles, base closures, saving the former Soviet Union from itself, a little war called Operation DESERT STORM, and the birth of my two children. But with my husband at my side, it was just part of the fun.

Since Europe lacked the convenience of all-night Wal-Marts, we had to return stateside just to be able to buy diapers at midnight. While at Scott Air Force Base, Ill., I got to escort media on the trip of a lifetime: an 11-day mission commemorating the 50th anniversary of World War II in the Burma-China-India theater. The mission was ultimately dubbed the “Hump Mission,” a name that our aircrew loved, of course.

The Hump Mission was my final hurrah as an active-duty Air Force officer. The pressures as a family and being a dual-military couple led me to resign my regular commission and become a Reserve officer. The challenges haven’t been quite as exciting, though I did work in the Pentagon the week after it was attacked by terrorists.

Since then I’ve worked as a contractor for a PR agency, the marketing director of a law firm, and the communications director of the Armed Services YMCA—all of which involved writing. I picked up two more degrees, one in International Relations and the other in Education. With certifications in secondary education, I can now teach both social studies and journalism to teenagers. Except the Air Force decided it needed me more, so I work weekdays with the Air Force and write weekends. 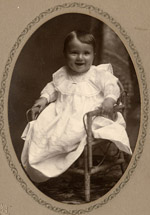 But if you read what I write, then you know my suspense involves history, and that deserves an explanation. At the tender of age of 19, a fellow college student introduced me to the U.S. Federal Census. Only another genealogist understands the bug you can catch from being introduced to your dead family. That’s how it was when he showed me the Iowa state census in 1910 where my grandfather was a six-year-old lad, I was hooked. Since I’d always known him as an old guy, it was a completely different perspective of “Grandpa.” The genealogy bug took me heart, soul and imagination.

I have combined my two loves of history and writing and have been published a few times. Outside my book, Roots and Branches of John H. Brower and Mary Anna Crawford, I’ve won a writing contest where I proved a family tale, and I’ve freelanced a few other pieces. Most recently, the National Genealogical Society printed a case study, Not So Plain Jane.

My husband retired from the Air Force in recent years and it looks like for the first time in my life, we’re establishing roots. I’ve lived in 14 states and two other countries, but it appears that we may soon break our record of four years in one place. We returned to the Midwest, where the nicest people live. Where else in the U.S. can you come to a four-way stop and be waved on by everyone else?

I tell my high school kids that it’s okay to change your mind about what you what to do when you grow up. Thank heavens I’ve finally decided to grow up and be a writer. I’m delighted to take you along for the ride!